JENNIFER DOYLE ON WORKING WITH THE SEDGWICK ARCHIVE AT DUKE 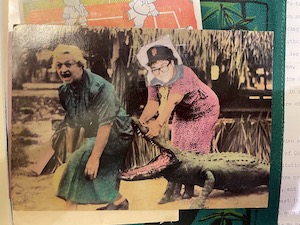 Image caption: A photo of a postcard José Esteban Muñoz sent Eve from Florida the summer of 1991

Jennifer Doyle is one of two inaugural recipients of the Eve Kosofsky Sedgwick Travel Grant to support the development of new work engaging with the Sedgwick archive at Duke.

I approached Eve Kosofsky Sedgwick’s papers with questions about a sentence that appears in A Dialogue on Love and is often used in memorial writing about her: “What I’m proudest of is having a life where work and love are impossible to tell apart.”

I was, and am, a student of Eve’s: I worked with her when she was at Duke. There are many reasons we lean on this sentence when we think of her—it feels true, and we know, from her writing, that this is how she wanted to be remembered. (In Dialogue on Love, she confesses to mentally writing her obituary, and then shares that line.) But each time I read it, I think about how often we talk about “work” and “life” like they are separate, and just assume the “love” part goes in the “life” bucket. I also think: it’s really hard to work so closely with love. I could write pages about how and why that’s true. We often talk about “life” and “work” as though they should be kept separate from each other but the reality is that one thing very much shapes the other—we don’t stop living when we go to work. Within the academy, we furthermore tend to draw distinctions between our work and our jobs: if your job impacts your work, it’s negatively. The ability to draw this kind of distinction is a luxury underpinned by material forms of privilege—whiteness, masculinity, wealth, for example. For some, a more or less traditional family structure (kids, home ownership) provides a structure which protects a person’s sense of their work from the effects of their job. Some scholars (a lucky few) enjoy a frictionless relationship between life and work, between the work and the job because their scholarship sits easily within academic structures. I remember Eve talking about these kinds of things when she talked to me about the job market, about finding my project and standing by it. I wanted to explore her papers to learn more about her work history.

I’ve been writing about a range of subjects related to sexual harassment. Over ten years ago, I was stalked by a PhD student who was studying queer theory. It was a terrible experience made all the worse by how colleagues at my university handled that crisis. A few years later, students filed a very serious set of complaints against a colleague in my department. Those two cases, one my own and one centered in my department, shaped how I teach, think and write. I found myself interrogating the contradictions that underpin our relationship to work.

When I started exploring what it means to have an intentional relationship to the harassment dynamics that surround us, I found myself dialing into spaces of her thought that I’d not fully appreciated for their practical application. Although the book I’m finishing is not centered on Eve Sedgwick’s work, I felt that, in my work, I was telling a story about the relationship of her work and queer theory to the problem of harassment. I felt there was more to this sentence about work, life and love than meets the eye. I wanted to learn as much as I could about her experiences navigating different campuses in especially her early career, when she was working at campuses that had only recently begun to admit women students, and in the late 1980s, as she worked across two emerging spaces of scholarship and teaching, women’s studies and gay studies.

There is so much in her archive I want to share. It was helpful to read reports and memos from her time at Hamilton College, working as a member of a Faculty for Women’s Concerns, and to see things like a letter to the editor of The Chronicle of Higher Education, written as a comment on an article about a homecoming weekend which failed to observe that the event represented as a genteel trip down memory lane was experienced by members of the Amherst campus community as chaotic, indulgent, and destructive. It was helpful to read letters from people who felt transformed by her work, as well as letters from colleagues who said some form of the following to her: “How dare you make me feel this.” The idea of her work disturbed people, the idea of Eve doing that work (as a straight woman) made a few people angry. She was really present to that fact. As her students, we saw this ourselves—in one of my job interviews, a queer feminist scholar tried to provoke me by asking me about my relationship with Eve, asserting “she’s not a feminist.” I think I said something like, “that will be news to her.” Another student was told, again, in a job interview, that there was no difference between him and Eve: Eve later joked to him that he should have replied, “Oh, yes, there is. I would actually take this job.” I remember quite distinctly her advising me to dial down her importance to my work, her presence on my committee, when applying to certain jobs. She wasn’t paranoid, or trying to work me up into defending her: the reality is that some people hated what she represented and what her students represented. I learned from her example that this happens when the stakes in your work are high. It’s important that graduate students working in gender and sexuality studies understand this—part of the work is finding your way across quite difficult, scarred, embattled terrain and learning to live with the fact that your work can upset people. There is a lot in the archive to learn from on this front (e.g. her contributions to a 1990s queer listserve, in which she tested out some of the ideas and rhetorical turns that characterize her essay “Queer and Now”).

The material closest to my very specific questions about her relationship to work come from correspondence with her brother David. One letter in particular really carries the real spirit of her advising. In the early to mid 1980s, she sent him a long letter full of advice about finding and building a rewarding working life. Take, for example, this paragraph:

There’s no relation to work that is not pretty sick—whether you do it, don’t do it, have insights into it, whatever. I mean, you’re brought up into a gendered nuclear family under late capitalism, you’re going to have a sick relation to work. I think it’s important (for folks like us) to feel our way into lots of different (successful and unsuccessful, productive and unproductive) people’s relations to work, and see the various sicknesses—NOT to feel disgust at them, but just to stop comparing one’s own relation to work with some imagined standard of okness. The point is to figure out some ways of having fun in your relation to whatever you do, figure out some (even incidental) rewards that will actually feel to you like rewards, and maybe even at best get something interesting done…

There is so much wisdom in this. A job is no good if it doesn’t allow this generosity—space that allows people to work together while also making room for the fact that people have really different experiences of and feeling about the work. A workplace in which people are generous towards each other on this point is really special.

This perspective is quite radical, and in line with how I remember her advising. She told us to stand by our work—by which she meant our writing, or whatever mode of expression, whatever form of labor felt meaningful. In a sense, that — whether it’s an essay, a poem, a recipe, a painting, a postcard — is the thing that takes care of you. She also encouraged us to listen to ourselves and pay attention to our way of working. And to pay attention to the structures that support our work.

Let me conclude these notes with more of the advice she passed on to her brother:

About organization: really talk yourself into feeling good about doing only as many things at a time as you are ready to do comfortably. [] Keep notes somewhere on your bright ideas for the projects you’ve bracketed for the moment—they’ll keep remarkably well. But mostly, decide on which few projects are projects-at-hand, and then figure out ways of feeding your bright ideas into them.  In this way—say you are me for a minute—your critical writing will be irrigated by cute metaphors, and then your long poems by critical theory—how wrong can it be? But really, be psychically resolute about channeling your inspirations into the project at hand; be interested in this one; trust that there will be more inspirations forthcoming when you get to the next one, as there will. (I can give this advice in good dues-paid conscience, after plenty of time—years, not months—spent essentially paralyzed between poem and criticism.) How many projects can you do at once? Only one writing one—then your teaching, reading, language-learning, and whatever, need also to figure in the total. (At least for me, administrative-type writing doesn’t seem to interfere with ‘serious’ writing at all; but it might be different for others.)

But what REALLY helps, as far as writing goes—this isn’t exactly advice, just a prediction, but it’s TRUE—is just getting over the threshold (whatever appropriate one) professionally. All it takes is getting to the point where, one way or another, you pretty much know that there’s a definite readership and format for what you’re about to write—or best of all, a deadline—and your relation to what you’re doing changes radically and wonderfully.

She definitely taught us all of this. I encourage my students to find publishing opportunities—any publishing opportunities—not because publishing will get them a job (it can help but publishing guarantees nothing when it comes to tenure-track jobs). Publishing can lead you to a sense of your readership. The sooner a graduate student can detach the sense of their reader from their committee the better. A dissertation committee is a bridge, a temporary structure of support. Not every advisor tells you this, but they should!

The emphasis, in her pedagogy, on the creative process—on discovering the nature of own’s own interests, finding one’s voice, one’s way of working—is why her PhD students worked on such different things. If one can see the trace of Eve’s teaching in our work, it’s in our dedication to making space for more and new forms of thought and expression.

I tried to focus on materials that spoke to my research questions, but I also spent a lot of time appreciating the traces of her art practices in her papers (the art works in this archive were not yet accessible during my visit). I see her creative practice—which cuts across poetry, sculpture, textile work—as an expression of her critical relationship to capitalist organizations of work, life and love (the “sickness” of the “gendered nuclear family under late capitalism”).  She was always experimenting. That experimentation, for much of her life, is animated by a sense of necessity, even urgency—that’s something that really leaps out when you read personal writing about her process (as in the essay “Come As You Are”). Making art was like breathing. Boxes of essays, notes, research materials and letters contain postcards, collages, experiments in drawing, stamp art, and more. I loved seeing this material, and remembering her crafting table. It’s been so long, but one of my last memories of spending time with Eve is of sitting with her in her studio and sketching together. Life, work, love.