MAGGIE NELSON'S 2000 REVIEW OF SEDGWICK'S 'IN THE BARDO' 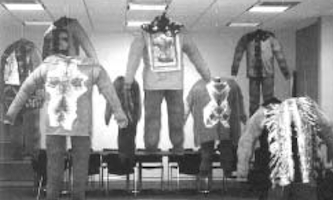 In Spring 2000, Eve Sedgwick presented an exhibition called “In the Bardo” at the CUNY Graduate Center. In conjunction with the exhibition, Sedgwick gave a talk titled “Come As You Are.” Maggie Nelson, then a doctoral candidate, wrote about the event, and recently, our Ti Meyerhoff was delighted to come across the article in the publication CUNY Matters. Nelson has graciously allowed us to reproduce it here.

Nelson describes Sedgwick’s “installation of her fiber art, in the form of a dozen or so large stuffed figures hanging from the ceiling, clothed in different kinds of cloth, paper, felt, and soie mariée, in varying shades of indigo blue.” As Nelson explains, the bardo “(Tibetan bar=in between + do=suspended,thrown)” referred to by Sedgwick “is the space between contracting a terminal illness and death itself…. The hanging figures Sedgwick created represent aspects of her experience in the bardo: ‘the disorienting and radically denuding bodily sense generated by medical imaging processes and illness itself’ on the one hand, and ‘the material urges to dress, to ornament, to mend, to re-cover, and heal’ on the other.”

The talk was accompanied by slides. Describing the “three-tiered presentation,” Nelson writes “Sedgwick spoke from a podium in the rear as we in the audience faced the screen. This increased the effect of her voice coming from a strangely suspended place and evoked a sense of meditation rather than scrutiny. The large stuffed bodies dangling in the room both obscured and framed one’s vision. When I tried to look at Sedgwick, for example, I would see her torso, but a translucent blue shawl hanging from one of the figures covered her face.”

Nelson calls Sedgwick’s talk “emotional, inspiring, unforgettable.” Nelson studied with Sedgwick at the Graduate Center and, much more recently, has written extensively and brilliantly, in her book The Argonauts, about Sedgwick’s work and its influence on her.