Is the Rectum Straight? Identification and Identity in The Wings of the Dove
Denis Flannery 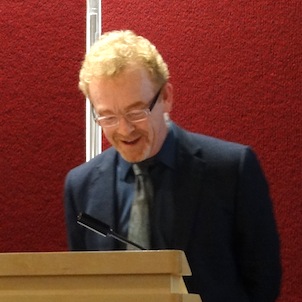 I’d like to conclude by turning again to Lionel Croy as James writes of him in The Wings of the Dove and to do so in the light of an exchange that takes place between Michael D. Snediker and Sedgwick in their Interview entitled ‘Queer Little Gods’:

MDS: I love that in Catholicism you can bury your little gods and it’s a totally nonfunerary version of burial, it’s less that they’ve died because they’re little gods but it’s as though they have to do their work underground for some reason. I’ve never quite understood that. The underground St. Anthony versus the Anthony venerated on an altar.
EKS: I haven’t run into that.
MDS: I think St, Anthony is the saint one buries if one is trying to sell one’s house, and he’ll only work if you bury him. You need to bury him in your yard and it will somehow attract buyers. But it’s as though the powers get released in the burial.
EKS:  That’s great.(1)

1) Michael D. Snediker and Eve Kosofsky Sedgwick, ‘Queer Little Gods: A Conversation Between Eve Kosofsky Sedgwick and Michael D. Snediker, The Massachusetts Review (49) 1-2, 212-213.Sedgwick’s great gesture in ‘Is the Rectum Straight?’ is to take Lionel Croy seriously, to empathize with James’s anxieties about his inadequate representation at the same time that she doesn’t quite buy into James’s frantic articulations of his failures in the Preface to the New York Edition. Taking Lionel Croy seriously as a queer source for the erotic energies of James’s impassioned novel means that, for Sedgwick, Lionel Croy and Milly Theale who, in the novel’s realistic register never ‘meet’, become very much partners in crime. And I use this phrase quite advisedly. For  Sedgwick, Lionel and Milly almost allegorize two modes in which the nineteenth century envisioned homosexuality: “a turn away from the criminal model of homosexuality in this period”, she writes, “seemed as if inevitably to involve a turn toward the medical model: from Lionel to Milly”.(2)2) Sedgwick, Tendencies, 90. A little earlier she claims that “One of the most astounding effects in The Wings of the Dove is the way Milly’s relation to her illness winds up, rhetorically, as an echo precisely of Lionel Croy’s homosexual disgrace”.(3)3) Sedgwick, Tendencies, 88. And she emphasizes how James “framed the two characters in this revisionary relation to one another”.(4)4) Sedgwick, Tendencies, 89. Despite this emphasis, Sedgwick gives no attention to the Lionel Croy who doesn’t exactly appear but is nonetheless mentioned towards the novel’s end, in the glowering aftermath of Milly Theale’s death.

Lionel’s appearance in the house of Marian Condrip, Kate’s sister, is recounted by Kate with a considerable emphasis on the preposition “in” that I’m contemplating in this essay. Kate tells Densher that Lionel has been in her sister’s house for three days, having arrived suddenly there “in a state which made it impossible not to take him in”. They talk about Lionel a little longer:

Densher hesitated. “Do you mean in such want —?”
“No, not of food, of necessary things – not even, so far as his appearance went, of money. He looked as wonderful as ever. But he was – well, in terror.”
“In terror of what?”
“I don’t know. Of somebody – of something. He wants, he says, to be quiet. But his quietness is awful.”
She suffered but he couldn’t not question. “What does he do?”
It made Kate herself hesitate. “He cries”.
Again, for a moment he hung fire, but he risked it. “What has he done?”
It made her slowly rise, and they were once more fully face to face. Her eyes held his own and she was paler than she had been. “If you love me – now – don’t ask about father.” (5)

5) Henry James, The Wings of the Dove, 395.There are several connections between these two exchanges (Sedgwick’s and Snediker’s, Kate’s and Densher’s), Sedgwick’s reading of the pairing of Lionel and Milly and the preposition ‘in’. Firstly, although ‘in’ as a preposition of occupancy is used here when Kate talks of Marian having to take Lionel in, most of the time it is used to refer to the occupancy of an aberrational state – “in terror”. So, for Snediker, certain kinds of “powers get released in the burial”, but Lionel is described as in the grip of a terrible power. For all that, Lionel, sequestered, Christ-like, for three days is far from ineffectual. “Father’s never ill. He’s a marvel.  He’s only – endless”, Kate claims a bit earlier, conferring on him the power so ostensibly wanting in the recently dead Milly Theale, but ultimately similar to the paralyzing legacy with which James’s novel ends. And Lionel has clearly lost none of his powers to incite questions (Densher “risks” asking, somewhat pointlessly, “What has he done”?). And Lionel has lost none of his power to make his thoroughly modern daughter suffer, hesitate and grow pale. There can be no better evidence of Lionel’s ongoing power than the use of silence about him as a bargaining tool, even at this late stage, between Kate and Densher. Along with and as part of his state of terror, Lionel, in Kate’s account, demonstrates an  “awful quietness” – a state of stillness not unlike the quiet of the grave. And the principal active verb she uses of him is “to cry”, which is employed in an unrelenting present tense. One of the key effects noted by David Kurnick of The Wings of the Dove is what he terms “performative leveling”, which is where characters, even when they have no immediate ties on the plane of realism, or even any ties at all, echo each others’ vocabulary, often through the use of adjectives such as the “wonderful”, and “beautiful”.(6)6) David Kurnick, 215-218. We might have an instance of this in the passage I’ve just quoted when Kate claims that on arriving at Miriam’s door, Lionel looked “as wonderful as ever”. I wonder if Lionel’s state of terror, his weeping and his taking to his bed for a sepulchral three days can be read, on the plane of performative leveling, as his uncanny response to death of the utterly uncanny Milly Theale? I wonder if his grief might be at the loss of the woman who, in Sedgwick’s reading, completed his being in James’s mighty text? Because it might be right to say that Lionel is “trundled offstage” in favor of Milly as James’s novel goes on.(7)7) Sedgwick, Tendencies, 89. But that very expulsion can also be read as a transformation. Lionel can be said to have become Milly, rather than simply be replaced by her. Her death can be said, then, to return him to his former state. And that means that, via Milly’s burial, a power has been released, perhaps resulting in Lionel’s terror. But in a novel where emotions, bodily states and erotic dispositions are nothing, as Sedgwick herself noted, if not contagious, that terror might be said to have spread to Kate and Densher. By being buried in the ground, Milly’s powers, newly released, are manifest in Lionel even as he grieves either a Milly whom he never met or a Milly whom he once was but is no longer. In taking to his awfully quiet bed for three days, Lionel might, Christ-like, be read as preparing for a resurrection certainly (he is, after all, “only endless”.) Or it might be that his powers, thus blended into Milly’s, are being released precisely through his – perhaps voluntary, like Milly’s — burial. Another way of reading this scenario is spatially. James’s text doesn’t specify a locale for Lionel’s bedroom in the house but it’s far from over-speculative to assume that by being in bed he is upstairs, that he is above Densher and Kate, just as they are above the recently buried Milly Theale. A few pages later, emphasizing the extent to which her dead friend is now above them, Kate is to famously claim that Milly’s wings “cover” both her and Densher.(8)8) James, Wings, 406. Can we read the young lovers as, like Lionel and Milly, like Snediker’s and Sedgwick’s queer little gods, “covered” like the corpses of the dead, buried like the Catholic St. Antony and only efficacious because this has taken place? And can we read this anxious discussion as a first rather Poe-like recognition on their part that they have been buried? Perhaps Densher’s question is incomplete. Perhaps he needs to ask not what Lionel has done but, rather, “What has he done to us?” A James outlined in that Gothic recognition of live burial is one to which Sedgwick would have been so responsive. The James outlined in that recognition would amount to powerful continuity between ‘Is the Rectum Straight’? and the essay to which it pays tribute, Bersani’s ‘Is the Rectum a Grave?’ The conceptual, literary, bodily and phantasmatic use of the preposition ‘in’ I’ve been outlining here echoes that very fine and quiet place, as Andrew Marvell would put it. But it also makes of that fine quietude something awful, as Kate puts it, producing awe, not only by virtue of its power to contain but also by virtue of its power, like Sedgwick’s and James’s cherished anus, to appropriate the world and to ensure thereby that uncanny powers are newly released.