Nationalisms and Sexualities – As Opposed to What?
Helen Finch 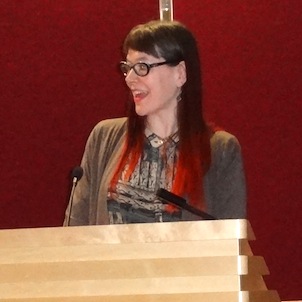 In ‘Nationalisms and Sexualities – As Opposed to What?’, Eve Kosofsky Sedgwick commented that the term “American had come, unbidden and remarked, to occupy a definitional center for almost every single one of the papers at a conference on Liberal Arts Education in 1988”. In my field of modern language studies, the question has been repeatedly asked as to whether ‘America’ has become the definitional centre for European queer studies. Leaving aside the vexingly paternalistic question of originality, this critique derived from an idea that the normative locus of queer studies is American theory, and that it is the duty of European and German art to respond to, and daringly demolish, this norm. I find this intriguing, not least given that Sedgwick’s textual reserves in this essay are sited firmly in the locus classicus of turn-of-the-century European modernism – Wilde, Forster, Proust, Nietzsche. More of this anon.

In this paper, I want to talk about where I was situated when I encountered Eve’s work – how it might help me think through nationalities and genders. I was having a particularly torrid breakup with my PhD thesis on the German writer W. G. Sebald, and trying hard to find ways to move away from the seemingly all-enveloping melancholy readings to which his work was being subjected. I wanted to open a path to the affective, the sly, the robustly camp aspects of his work, but these were being read under a melancholy sign; the down-pushing melancholy in the dominant discourses surrounding his entanglements of German nation and queer love cast me into some despair. I wanted to think about how to rehabilitate queer utopias, how to evade this European hypostatisation of history as a natural history of destruction. Sedgwick suggested to me that I might need to look in two directions at once. 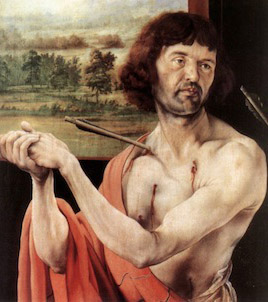 I started to think about the image of St. Sebastian. Sebastian is a seminal (used advisedly, or possibly inadvisably) figure in queer modernist iconography, and here I think particularly of Death in Venice – an intellectual and ephebe-like masculinity that stands silent in proud shame, clenching its teeth while it is pierced by swords and spears, but also a figure of penetrative jouissance. This St. Sebastian is attributed variously to the German painter Matthias Grünewald, and to another shadowy figure, Mathias Nithart.  In his 1988 poem ‘After Nature’, Sebald makes of this painting a figure of sameness that responds to what he calls the “painful division of the sexes” at the dawn of modernity; St. Sebastian was painted by two artists painting as one, and represents two artists in one homoerotic image. Here I quote from Michael Hamburger’s translation:

Indeed, it seemed as though in such works of art men had revered each other like brothers, and often made monuments in each other’s image where their paths had crossed.(1)

1) W. G. Sebald, ‘After Nature’, in The Rings of Saturn, tr. by Michael Hulse (London: Harvill, 1998), x. After Nature, tr. by Michael Hamburger (London: Penguin, 2003), 6.Sebald mines this elective affinity as a political resource, by viewing Grünewald’s affiliation as a resistance to the strictures of emergent national masculinity. His Grünewald’s averted gaze is a refusal of the hubristic direct gaze of Renaissance man, his queered sexual orientation is a side-step away from the heterosexual norms of the times. The affection of German men for each other is framed by the narrator as a response firstly to the terrible separation of the genders enforced by the church, but also to the burden of gender itself: “The misfortune of saints is their sex”, says Sebald.(2) 2) Sebald, After Nature, 7.

What is worrying, to me, about this productively queer re-reading of Grünewald is that Sebald’s Grünewald performs just the same definition of self versus other that Sedgwick queries towards the end of her essay. Grünewald is married to a Jewess, whom he rescues from the Frankfurt ghetto, but the marriage is unhappy and he forces her to take a Christian name. The Jewish woman becomes the victim of the victorious homoerotic bond between Grünewald and his chosen male brethren; Sebald’s Grünewald, at the beginning of modernity, repeats the intertwined logic of anti-Semitism and misogyny: the “womanless idyll” that Sedgwick later called it.(3) 3) Eve Koskofsky Sedgwick, ‘Anality: News from the Front’, in The Weather in Proust (Durham: Duke University Press, 2011), 174.

Sebald’s modernist return to these foundational inscriptions of gender and nation thus has a double movement: retracing the anti-semitic, misogynist foundations of European modernity, and seeking solace in a meditation on the same. My answers to these questions are principally Deleuzo-Guattarian, and thus linked to the French critical theory that Sedgwick probed at a distance. But I also found that queer avuncularities can find a way to push against the strongly paranoid readings of queer sexualities that I was having thrust upon me. Turns out, I was ‘doing Eve’ already.

These dense moments of the same turn out, I would say, also to yield their pleasure. I am not sure whether, twenty years on, Sedgwick’s work has helped me resolve these knotty questions, but knowing that she was there before me – always already? – has helped enormously in thinking through these problems of the same, and in gaining pleasure from them.

My happy ending to this queer affair with Sebald does not mean that these questions are all answered. Further, Sebald, like Sedgwick, turns to the problematics of Roger Casement, a figure who combines English exotifying, Irish nationalist and homosexual tendencies. In The Rings of Saturn, Sebald writes a queer hagiography of the Irish nationalist who also engaged all his life in sexual relationships with adolescent boys from the countries where he carried out his human rights work. Sedgwick warns against “utopian misunderstandings of foreign nationalisms”, and Sebald’s hagiography of Casement falls under this category. But what are we to make of the fact that Casement has proven a rich resource for Irish queer rights activists, from novelist Colm Tóibín to unionist Jeffrey Dudgeon, but also for the most stultifyingly monotonous novel (The Dram of the Celt) by the heterosexual Mario Vargas Llosa, who views Casement’s sexual engagements as a forgery? What do these forged inscriptions of queer modern Irishness serve?

If Sedgwick asks us to question the sameness of the Same – the homo nature of homosexuality – she also questions the creeping tyranny of the same surrounding contemporary national discourses of ‘gay rights’ in the U.K. Gay marriage rights become, in what Žižek would call “liberal communist” discourse, a marker of European sameness, distinguishing us from our intolerant, homophobic other.(4)4) Slavoj Žižek, On Violence: Six Sideways Reflections (London: Profile, 2009), 14. Sedgwick also asks what on earth it might mean to ‘have’ a nationality as one is supposed to ‘have’ a gender – the supposition behind the new equal marriage legislation is that one ‘has’ one gender and only one, although one may apply to have another under certain clearly defined circumstances. Sedgwick suggests “how ragged and unrationalizable may be not only the rights and entailments, but the definitional relations of the habitation/nation systems of the modern world”.(5) 5) Sedgwick, Tendencies, 149. This question is becoming depressingly more pertinent.

Meanwhile, as the Guardian recently reported, queer asylum seekers to the UK are being forced into increasingly flamboyant publicisation of their sexuality in order to deflect deportation, including filming themselves having sex.(6)6) Owen Bowcott, ‘Gay Asylum Seekers Feeling Increased Pressure to Prove Sexuality, Say Experts’, The Guardian (February 3 2013), (Accessed February 3 2013). In such a situation, where the official dogma of the UK vaunts its tolerance by demanding that cis-gendered homosexuals become the same in socially-sanctioned dignity, while making the abject presentation of the stigmatised body of the asylum seeker a condition of their safety, then I think that we most certainly have need of recourse to Sedgwick’s tools of reading and attentiveness to the non-identical if we are not to become consumed in a double bind of nationalism and paranoia, not least paranoid ressentiment towards those queers who do marry.

How can we productively engage with the remapping of the homosexual British nation? Sedgwick says we need to look in more directions than one, athwart, and aslant. My excursis to Sebald has shown the pleasures and perils of looking backwards; my question becomes, how can we become a little less paranoid and a little more productive in our thinking about the same?