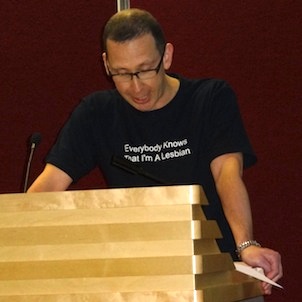 The epigraph for my paper comes from a song by Anthony and the Johnsons.

1) Antony and the Johnsons, ‘For Today I am a Boy’, I am a Bird Now (Rough Trade, 2005).Who wouldn’t want to grow up to be Eve Kosofsky Sedgwick? When I was 20, in 1992, when I first saw Eve give a paper, ‘Is the Rectum Straight: Identification and Identity in The Wings of the Dove’; and, certainly, a year later, when Tendencies came out, I was all about Eve.

And Eve is still who I want to be if I ever grow up. But lately I have been realising, with more care and compassion, parts of me are still a motherless child, parts an abandoned boy. Other tendencies within me are, though, perhaps currently more queerly visible and clearly audible to you, if not quite, distinct. Because, as my t-shirt suggests, “everyone knows that I’m a lesbian”, right? And, as I re-read both ‘T-Times’ and ‘Queer and Now’, in preparation for this paper, I began to understand better what that means.

To get to that, it might be worth acknowledging something else that is characteristic of me, when it comes to reading Eve. It takes me an insanely long time, sometimes years, sometimes more, to hear her most obvious puns. For example, I’m not sure that, much before these last weeks, I ever heard in the title, ‘T Times’, anything but an allusion to the queer, cross-gender-identifications Eve begins Tendencies by thinking about, as manifested in gay men wearing dyke t-shirts and lesbians wearing faggot t’s.(2) 2) Sedgwick, Tendencies, xii. I’m not sure I ever heard the title as a pun on tea times, as in the regular, quotidian time for a cuppa, in my case, or a glass of iced tea, in Eve’s; or as a reference to the T, for Trans, in LGBTIQ politics, theory and activism. It also took Victoria Coulson, who I learn from constantly, to point out to me that there also may be a golf allusion here, as in t-ing off.

My inability to hear the T of trans, for a long time, was partly to do with the comparatively more recent emergence of trans theory, in relation to the dominant queer theoretical lenses of the early to mid-nineties, when Tendencies came out. But it still requires, for me personally, more explanation because, for about as long as I can remember, I’ve been about as cross-gender and, then, cross-sexuality identified as a gay boy could be. Indeed, almost all of my most formative influences, from my adolescence forwards, derive from a viscerally intense,(3)3) I’m tacitly alluding here to sentences from the ‘Project 2’ subsection of ‘Queer and Now’ (Tendencies, 14). highly inventive and speculative cross-identification with lesbian women and culture, as I inferred, imagined, and later came to know them and it, and as I discovered them and it to be a source of relish and knowledge; of emotional, intellectual and political sustenance and succour; and of artistic and relational skill, challenge, demand, experimentation, speculation, daring, dignity and pride. And it doesn’t risk exaggeration to say that, as a boy coming from a family which didn’t really read or own books, I genuinely thought, aged around 11 to 13, that the literary canon comprised writing by no-one but feminist and lesbian women, as found in the pages of books published by Virago and the Women’s Press, thanks to my then-not-out best friend Alison Farrell.

Similarly, when it came to my musical education. After all, how would I have been, and who, if I hadn’t discovered, in 1986, Suzanne Vega’s eponymous first album; or, two years later, Joni Mitchell’s Chalk Mark in a Rainstorm; Ladies from the Canon, and from Manhattan, that I loved as women and as a woman, and still do? And that was before my then friend Nina Diamond sent me the first two albums by Ani Difranco, in that queerly promising summer of 1993, the same English summer of Tendencies?

But if, for me at least, it makes a good deal of sense to out myself as a lesbian, a lesbian-feminist man or a lesbian identified man; as well as a multiply-gendered and oriented queer and trans person; and, more recently, as a pussy, cock, and ass lover, who’s putting the animals back into sodomy, the bestiality back into queer theory; if, then, for me, the pull of lesbian separatism is only too clear, I find myself increasingly needing to explain, to myself and my shrink, the even greater push, at a crucial moment, in the early to mid-80s, away from identifying myself as a gay man,in spite of this being a period in which so many artists were suddenly making formerly invisible possibilities visible and audible. And here I’m grateful to Alex Beaumont for reminding me that the mid-1980s was a telling televisual epoch, on the newly founded Channel Four, where I first found a way and excuses to see My Beautiful Launderette around 1985; Derek Jarman’s Caravaggio and The Last of England and Merchant Ivory’s Maurice a year or so later; and when I heard the Pet Shop Boys’ first album Please in 1986, which helped me imprint onto  that eminently receptive screen for queer projections: silent, musical, fashionable, adjacent, beautiful Chris Lowe?

This was also a period in which, somewhere in a world I couldn’t yet imagine from my boarding school in Market Rasen, called, was it?, Brighton or London, Eve was delivering, at a conference on the ‘Poetics of Anger’, a deliciously perverse paper called ‘A Poem is Being Written’, of which more later, to the delighted ears of another subsequent chum, Simon Watney, who was dedicated his time to his related life’s work of making so many queer lives feel more possible and plausible, desirable and valuable, liveable and loveable.

So why, then, in spite of Merchant and Ivory, Simon and Eve, and Neil, Chris and Derek’s best efforts, didn’t I come, in the section-28 context of rural Lincolnshire, in the mid-eighties to identify, in any straightforward way, as a gay man? The answer is, I’ve come to realise, these last weeks, because, in the fractured intricacies of the stained glass window which is my subjectivity, for every shard of beautiful, identity-constituting lesbian glass, there’s an identity-shattering lead line of male homophobic dis-identification, disavowal and violently enforced foreclosure.(4)4) My metaphors here derive from any number of illuminating conversations with Jasmine Allen.  After all, how the hell was I supposed to want to grow up to be either a man or a gay man, at De Aston School in 1986, when the first two boys I genuinely loved, and who I told, didn’t utter another word to me for more than a decade, in the first instance, and, in the second case, never spoke to me again. And if, in the atrocity story and obituary which is my autobiography, Jason, the one out boy at my school, was raped with a stick by his immediate male peers to teach him a lesson he would never forget?

This recently integrated memory explains a lot, to me, why I tend to be on team Tendencies, as well as No Future,(5)5) Lee Edelman, No Future: Queer Theory and the Death Drive (Durham and London: Duke University Press, 2004). when it comes to those queer kids Eve describes, and is similarly haunted by, in ‘Queer and Now’, who are “two to three times likelier to attempt suicide, and to accomplish it, than others”; and those “minority queer adolescents” who are “at even more risk”.(6)6) Sedgwick, Tendencies, 1. It also perhaps explains why I remember 1993 so vividly, when I found Tendencies, for the first time, in the women’s studies section of Heffers, the big bookshop in Cambridge; and for anyone too young to remember life before the internet, it’s hard to explain quite how much more exciting it was, back then, to discover texts on bookshelves, without warning or the benefit of search engines.

In 1993, the “anguish” I felt as an eleven year old, when boys and men had taken “something from me I didn’t even know that I had”, was far from “outgrown”, and, if “remembered”, certainly not yet understood, incorporated or digested.(7)7) The quotations here combine a poem by Emily Dickinson Sedgwick cites on the first page of ‘Queer and Now’ (1) and lines from Ani Difranco’s ‘Letter to a John’, particularly the live ‘Letter to a John/Tamburitza Lingua’ mash up version from So Much Shouting, So Much Laughter (Righteous Babe, 2002). But it does, at least retrospectively, explain to me why, if other, more straightforward, and less imaginative and self conscious, people were baffled and irritated at Eve’s coming out, in Tendencies, as a gay man, it made perfect sense to me. Indeed, Eve may have been the first gay man I ever really loved and trusted, as an adult gay man, and no-one else made wanting to be gay, for me, then, not a baffled, repressed, conflicted, poignant tendency, but a pleasurable relational and inhabitable possibility. And my inner gay man wasn’t the only person to find themselves picked up, looked at, recognised, ravished, initiated, loved and held afterwards in the women’s studies section that day by that beautiful woman with a flushed face, punk-dyke’s crew-cut, and centred, mindful subject’s fearless, generous gaze. Also at therapy, or should that be the seminar, march, party, encounter group and orgy, in short, also at Tendencies was my equally amazingly graced and graciously amazed masochist, inner lesbian feminist, fat kid, mortal uncle, masturbator, bodhisattva, and my academically ambitious would be professor; my theatrical, queer-theoretical would be performance poet and creative writer. Oh, I was found.

Now my lost, unloved little kid, who would otherwise never have believed, could start to feel that, farther along, the road would widen, the air brighten; that in the more cosmopolitan atmosphere out beyond provincial Market Rasen, at West Sixteenth Street in Manhattan, was a world, Eve and Hal’s, where someday I’d be welcomed, fed, held, listened to, seen, loved and understood. Elsewhere, in Tendencies, as we shall see, Eve asks how to raise your kids gay? Pretty easy I’d say.Don’t abandon them, aged eleven, in a Victorian boarding school and let their peers rape them with a stick. Show them My Beautiful Launderette. Play them the Pet Shop Boys Please. Most importantly, give them a copy of Tendencies.