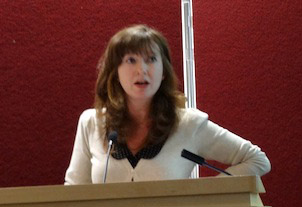 To make things more difficult for myself (and why not?), I’m going to triangulate these two texts and their central motif – friendship – with the process and production of drawing, something that I’ve been thinking about recently in abstract, as an art historian.

These final chapters of Tendencies show Sedgwick attempting to describe the queer state that is friendship. Unrecognised in law and undetailed in language (although significantly ‘friend’ itself stems from the Germanic terms for ‘love’, ‘caress’ and ‘woo’), friendship is perhaps the most under-determined and under-represented relation we have with others. Devoid of pre-existing frameworks, conventions and expressions, ‘friendship’ is freshly drawn and revised with each new relation.

Friendship is therefore a creative act. Hence perhaps Sedgwick’s ironic appropriation of the syntax of heterosexual reproduction in ‘Memorial for Craig Owens’, a discussion of friendship’s effects in which the “enigmatic” and “magnetic” aura he held for her, the sheer draw of him, is described with a fitting cupidity. Their relationship therefore appears as a form of “cherished adhesion” in which Owens becomes both the source and the figure of a productive projectile, in an explicit statement of friendship’s procreative dimensions, its capacity for the generation of ideas, texts and tertiary outcomes – however intermittent and distended that relationship might have been “in real life” (whatever that is). As such, friendship is described here as a process – that is to say, as a state without finite end(s), or properties, a state of momentum and potentially ongoing fabrication – which is always triangulated through forms of representation and interpretation (a term whose etymological connotations of ‘spreading or talking between’ suggest how proximate acts of interpretation and social affiliation might be). The challenge that Sedgwick takes on in these two chapters is to transform this unsignified yet seminal process into a motif capable of being articulated – to turn the ground against which thoughts figure, into a meaningful figure in and of itself.

‘Knowledge’ of the friend (of their tastes, their biographies, their secrets) can play no substantial part in this descriptive process since, thanks to its impossible demands for completeness and conclusion, such knowledge will always get in the way of attempts to capture friendship’s processual and inter-pretive state, its smudginess. Indeed, the ability to bear comprehensive or delineating witness to the friend’s ‘real life’ manifestation (through statements which are, anyway, so often grounded in competition over contact hours) can only be a product of the consciousness of differentiation and separation from the friend, of the line between us and them. Furthermore, such consciousness results even from attempts at direct approximation: in attempting to (become) like our friends by taking on their props, poses and perspectives – as Sedgwick did with Michael Lynch’s idiosyncratic white-framed spectacles – we are forced to realise not only our differences from them (and from ourselves) but also the opacity of their experiences to our understanding even when those experiences are, like the wearing of white glasses, shared. Other forms of enquiry and knowledge are therefore required to do justice to friendship, forms which Sedgwick ardently called for in these two chapters.

I want to suggest that one answer might be found in the very structures and veils which divide us from each other – and which therefore form a shared connective field whose opacity makes it radically available to acts of equivalence, identification and communication unregulated by temporal, legal or linguistic norms. In other words, I want to promote the positive value of fantasy as a mutual state within intersubjectivity, over and against the reality principle to which fantasy is conventionally compared as a pathological or aberrant inversion, invoked in order to be corrected through ‘knowledge’. In the apparent yet misleading blankness of their frames, the white glasses might (as Sedgwick suggests) therefore be a figure for the tertiary space of representation and interpretation – the space of fantasy, imagination and free yet sparking ‘play’ – in which friendship is experienced. This opaque yet richly-stuffed space exists at some distance from the binaries, taxonomies and categorical distinctions at stake ‘in real life’, and it’s therefore a space across which we connect with each other differently yet substantially.

By now, it will probably be clear that I think meaningful parallels can be drawn between this opaque field – which serves as the actual common ground of friendship and which is constantly inscribed with tertiary figures of thought and feeling – and the sheet of paper which supports a drawing. This is not however to wish for the humanist reification of interpersonal communication and connection as being as unproblematic and as unspecified as a blank sheet of paper; Sedgwick’s work rightly urges us to consider ways of connecting after the necessary demise of such universalising concepts. Instead, I want to correlate friendship and drawing as processes which take place on opaque grounds and (therefore) within what Sedgwick calls a ‘discontinuous projective space of desire’ where the shapes and textures of things (of bodies, voices, tonalities and material signs) are paramount.

An example here might be this portrait of Richard Westall (Figure 1), 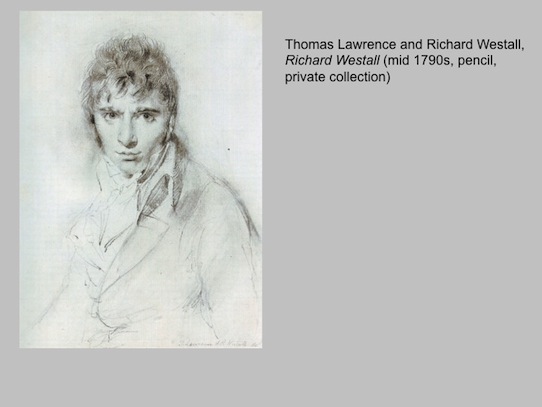 in which drawing and kissing seem to coincide. Here, forms and surfaces alternately confront, and turn away from, the viewer in a reciprocal dynamic which also characterised the drawing’s production by these two artists – Thomas Lawrence and Westall himself. Whose idea was this drawing? Who began it, and who joined in? Is this a portrait, or a self-portrait, or something in-between, a work in which two men and three positions (artist, sitter and artist-sitter) overlay each other upon a single sheet of paper?  Such contact is given notational form in the smudging with which much of Westall’s face, hair and body has been rendered, in acts of rubbing and drawing through which the medium is pulled (and at times, seemingly kissed) across the page.

We might find the textual equivalent for such rubbing in the repetitions and rhythms of Sedgwick’s prose in ‘White Glasses’. “The first time I met Michael Lynch… When I first met Michael Lynch… The day I first met Michael Lynch…” – Sedgwick’s invocation of her dead friend is a mantra, a rocking back and forth and longed-for return, always with variations. Here, at the level of prose formation, is a recognition that creation is always recreation. But it’s also an example of how lines are strengthened when retraced differently, whether with greater confidence or with increased doubt, whether hesitantly this time or other ends sought the next. If such a centripetal pattern of expression and meaning is the pattern of friendship, it’s also the pattern of ‘drawing’ in the dictionary sense of ‘imparting motion or impulse in the direction of an actuating force’. Both friendship and drawing might therefore be understood as processes of attraction, pulling and propulsion, and of loading, variation and renewal, processes of which they are also as well the products. In both, lines of thought, feeling, connection and differentiation are hazarded, assayed and returned to upon open supports, in processes which are historically contingent and yet rarely determined in full by external forces. Indeed, if they can be characterised at all (which is debatable in both cases), friendship and drawing might be characterised by their shared state of permanent invention and incompletion, by their lack of the ‘frame’ which would resolve them into products more than processes, into settled ‘legitimate’ relationships on the one hand and into ‘works of art’ on the other. Both friendship and drawing might be defined, then, by their lack of definition – and conclusion.

And so to endings, in this, the final presentation of the conference, in which I have responded to two texts about death and life. I want to conclude with a waggish and somewhat disjointed coda, a tail (Italian: ‘cauda’), both an ending – a passage of ‘more or less independent character introduced after the completion of the essential parts… so as to form a more definite and satisfactory conclusion’ – and a ‘start’ (the eighteenth-century term for a tail or handle).

Reading them again, the last two chapters of Tendencies brought to mind Justus Lipsius’s An Epigram on Mopsus (1605), a rhetorical essay on friendship to which Sedgwick’s words seem a distant heir. Here, the early modern university lecturer offers his students a Taciturn model of friendship whose exemplary form is that offered by his own dog, Mopsus. That Lipsius’s canine philosophy was both characteristic and longheld is suggested by Goltzius’s portrait of him, produced almost twenty years earlier, in which a clear equivalence is forged between dogs and books as sources of profound and meaningful knowledge (Figure 2), 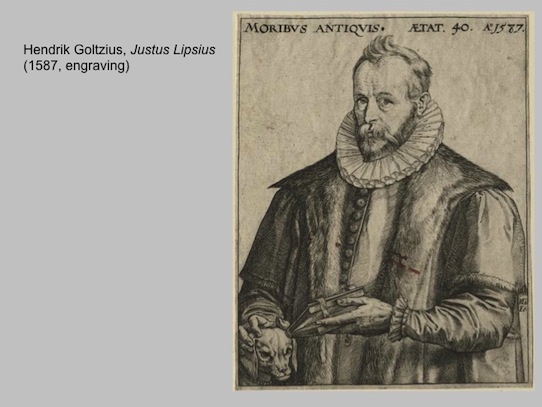 as academies of equal value. Indeed, the intensity with which Lipsius appears to clutch the dog’s head and that head’s location within the portrait, there where academic sitters conventionally gestured towards human skulls, suggest that the lessons about friendship offered by Mopsus and his kind (and converted into words by Lipsius) are also hugely significant lessons about life.

Here, I am reminded in turn of just how often dogs and other pets have served as infant academies for artists – as, for famous example, in Edwin Landseer’s prize-winning childhood drawing (Figure 3). 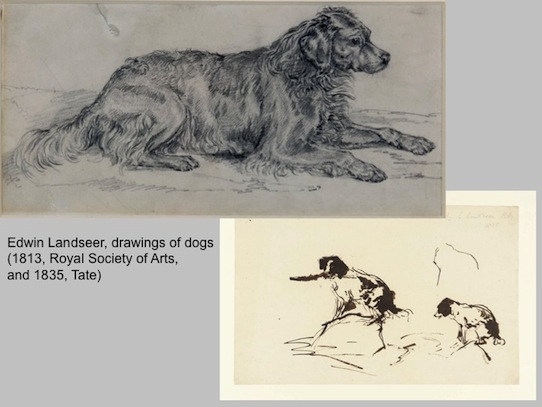 And as Landseer’s subsequent sketches of dogs suggest, with their concerted and equal attention to the back halves of his subjects, the tail is an extraordinarily expressive device, seemingly articulating a range of responses to the world which might include (we imagine) happiness, readiness, excitement, submission, irritation, fear, boredom…  The tail is a form of punctuation, an indicator of tense, a grammatical effect, a voice, all of these things. Yet it also seems to have a semi-independent status, part of yet different from the body to which it belongs, and which it is also capable of motivating and driving, when ‘the tail wags the dog’.

We use this phrase in the academy to describe procedural errors of interpretation in which context (or ground) begins to dominate text (or figure), in which that which should inform begins to be that which is informed – in which the ‘proper’ roles (of academic enquiry) are reversed. Fittingly then, Sedgwick repeatedly reminds us of the virtues of letting the tail wag the dog, of holding the reins of interpretation in other ways that we have been taught. In this way, she reminds us, we can cast into relief the processes of control, refusal and regulation with which we are inducted, described and contained by the academy: as in drawing, we see things by leaving off from them. In letting the tail wag the dog sometimes, we might see and appreciate more clearly the moments at which interpretation is in play, and in which life – and with that, friendship – is constituted.