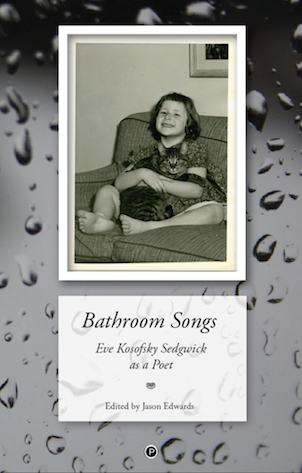 Bathroom Songs: Eve Kosofsky Sedgwick as a Poet is the first book of essays to consider the poetry of one of the twentieth- and early twenty-first-century’s most important literary, affect, and queer theorists. Acclaimed as one of the “truly innovative” poets of her generation by Maud Ellmann, Sedgwick’s work as a poet is, perhaps, less well known, but is no less compelling than her ground-breaking trilogy of queer theoretical texts: Between Men: English Literature and Male Homosocial Desire, Epistemology of the Closet, and Tendencies.

The book includes seven specially commissioned essays considering Sedgwick’s published poetry and writing about poets, by Angus Brown, Meg Boulton, Mary Baine Campbell, Jason Edwards, Kathryn R. Kent, Monica Pearl, and Benjamin Westwood, that range across the complete range of Sedgwick’s work, from her earliest published lyrics through her first collection of poetry, Fat Art, Thin Art, to her part-haiku, part-prose autobiography, A Dialogue on Love, and beyond. In addition, the book contains over forty of Sedgwick’s previously uncollected poems, ranging from her earliest poem on T.E. Lawrence to her final poem ‘Death’, introduced and contextualized by Edwards. – From the jacket copy

1967-1969
T.E. Lawrence and the Old Man, His Imagined Tormentor
Movie Party, Telluride House, Ithaca, New York
Falling in Love over The Seven Pillars
Calling Overseas
What the Poet Thought And What She Found in the Telluride Files:
Epilogue: Teachers and Lovers
The Last Poem of Yv*r W*nt*rs