THE COHERENCE OF GOTHIC CONVENTIONS 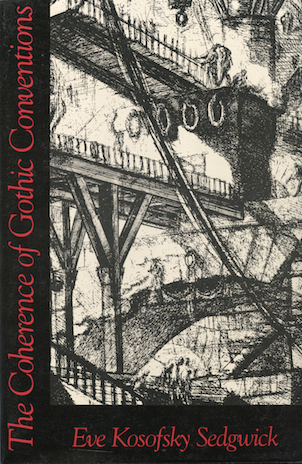 The Coherence of Gothic Conventions was first (1975) a dissertation, then, with substantial revisions to Chapter 1, a volume in the 1980 Arno Press collection, “Gothic Studies and Dissertations,” whose Advisory Editor was Devendra P. Varma. The essay presented as Chapter 4 of this volume was written at the same time as the revised Chapter 1, and published in PMLA in March, 1981. —From the Acknowledgments

This new edition of The Coherence of Gothic Conventions makes the case that the Gothic in English literature has been marked by a distinctive and highly influential set of ambitions about relations of meaning. Through readings of classic Gothic authors as well as of De Quincey and the Brontes, Sedgwick links the most characteristic thematic content of the Gothic firmly and usably to the genre’s radical claims for representation. [An added preface] clarifies the connection between the linguistic or epistemological argument of the Gothic and its epochal crystallization of modern gender and modern homophobia. —From the jacket copy

Chapter 1.   The Structure of Gothic Conventions
Chapter 2.   Language as Live Burial: Thomas De Quincey
Chapter 3.   Immediacy, Doubleness, and the Unspeakable: Wuthering Heights and Villette
Chapter 4.   The Character in the Veil: Imagery of the Surface in the Gothic Novel