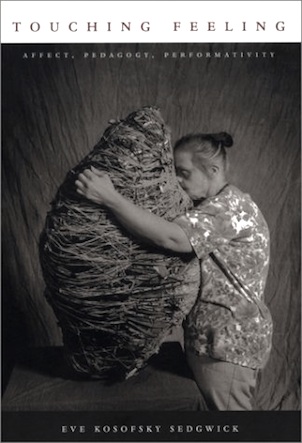 A pioneer in queer theory and literary studies, Eve Kosofsky Sedgwick brings together for the first time in Touching Feeling her most powerful explorations of emotion and expression. In essays that show how her groundbreaking work in queer theory has developed into a deep interest in affect, Sedgwick offers what she calls “tools and techniques for nondualistic thought,” in the process touching and transforming such theoretical discourses as psychoanalysis, speech-act theory, Western Buddhism, and the Foucauldian “hermeneutics of suspicion.”

In prose sometimes somber, often high-spirited, and always accessible and moving, Touching Feeling interrogates—through virtuoso readings of works by Henry James, JL Austin, Judith Butler, the psychologist Silvan Tomkins, and others—emotion in many forms. What links the work of teaching to the experience of illness? How can shame become an engine for queer politics, performance, and pleasure? Is sexuality more like an affect or a drive? Is paranoia the only realistic epistemology for modern intellectuals? Ultimately, Sedgwick’s unfashionable commitment to the truth of happiness propels a book as open-hearted as it is intellectually daring. –From the jacket copy

“[Sedgwick’s] ideas about the structures of desire between men in fiction have generated critical work for others, as her theories are put to work in re-readings of authors, texts, genres and periods. Any critic who so successfully challenges the fundamental terms of the discipline, and opens up new subjects for others to write and publish about, deserves fame and distinction. Moreover, Sedgwick’s courage in speaking openly about her illness and about aspects of her self that most academic women would keep private, including being fat, is very moving.” –Elaine Showalter, London Review of Books

“Eve Sedgwick is one of the most amazing scholars of our time. Her erudition, brilliance, passion, and unusual combination of interests thrill. Sedgwick’s latest book, Touching Feeling: Affect, Pedagogy, Performativity, excites, demands, perplexes … Sedgwick’s book is a marvelous read. Literary scholars and professors of education, put your seatbelts on, for Sedgwick certainly takes you on an interesting ride. She once again makes a significant contribution to not just one but many intersecting fields—literary criticism, education, queer theory, cultural studies, and autobiography. If scholars are not yet in love with Eve, they will be after reading this book.” –Marla Morris, Journal of the History of Sexuality

“[Sedgwick’s] miraculous prose keeps ideas and attitudes in play that would collapse into contradiction or program in a lesser writer… In the era of queer theory, Sedgwick’s miraculating writing keeps open a sense of sexuality as not binarized, neither only instrumental nor irreducibly conflictual, even when she is most passionately engaged in the work of advocacy. Today, writing through and after ‘queer’ in a landscape of political impoverishment, Sedgwick’s thought and writing function, as she would say, as a kind of semaphore: There is More Than This. I think we need her writing more than ever.” –Christopher Nealon, American Literature

“Fearless, challenging and occasionally exhilarating, Sedgwick remains one of the most courageous critics around.” –Publishers Weekly

“Sedgwick’s remarkable power to define the field of gender and sexuality studies over the past couple of decades can be traced to a number of causes: her undeniable brilliance; her apparently infinite will to read – and especially to read against the grain of a deadening common sense; her generosity, to which nearly all who write about her attest. But her influence is certainly also traceable to her wonderful talent for performing linguistic acts of definition.” –Heather Love, Women’s Review of Books

“Of the many insights and fronts for action suggested by this book, the one I will take most to heart is a continuing belief in possibility. This is especially necessary when in more cynical moments a favored interpretation seems automatic or even mandatory. Sedgwick has tried to provide the conditions for a mind ‘receptive to thoughts, able to nurture and connect them, and susceptible to happiness in their entertainment.’ It sounds such a modest hope, yet her writing shows it to be one consistently beset with difficulties, adding to our estimation of Sedgwick’s courage in these conservative times.” –Melissa Gregg, The Electronic Book Review

1.  Shame, Theatricality, and Queer Performativity: Henry James’s The Art of the Novel

2.  Around the Performative: Periperformative Vicinities in Nineteenth-Century Narrative

4.  Paranoid Reading and Reparative Reading, or, You’re So Paranoid, You Probably Think This Essay Is About You